For many people and even some Christians, 'Mission' is the romantic ideal of traveling half way across the world to - as ‘The Man from La Mancha’ famously sang - 'be willing to die so that honour and justice may live, to fight for the right, without question or pause, to be willing to march into hell, for a heavenly cause' . But is it really necessary to travel to the far corners of the Island to do Mission? Or the far corners of the world?

God had a mission right from before creation that he planned and purposed to see through to completion. Somewhere where we see that most clearly is in the fall of man.

The account of the fall of man (Gen. 3),  reveals a lot about man. It tells us a lot about ourselves as human beings and explains a lot about the mess the world is in today but it tells us even more about God. The creation and fall accounts tell us that right from the beginning God desires relationship with man and nothing could thwart that. 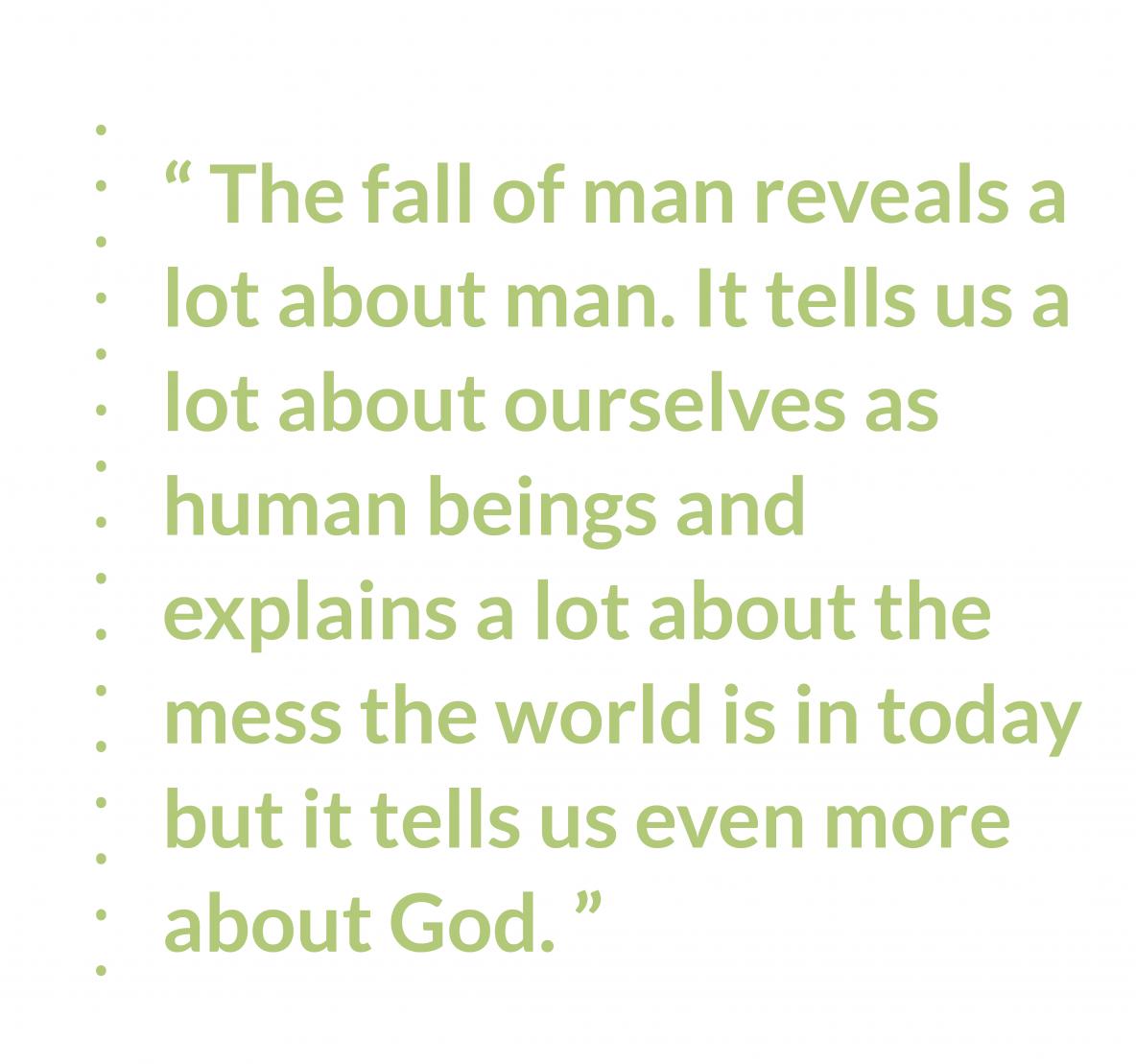 Generally, when we've been wronged the desire is to wait for the person to come and apologise – they have committed the offence so it's up to them to fix it. But what does God do? Adam messed up. Adam and Eve sinned. God owes them nothing. Yet God comes down and God takes the initiative - taking the steps to restore the broken relationship.

Adam and Eve do the predictably human thing – they hide themselves and they try to hide their guilt and shame – they cover up, quite literally. Adam and Eve sewed fig leaves together and made coverings for themselves (Gen. 3:7).

As Christians we are probably familiar with the phrase “the Sunday best”. For some of us, our Sunday best is an everyday thing. Every day is a cover up (pun intended).

Adam and Eve are really just examples of the universal human nature - try to make yourself look good and do your best to keep God at a distance. Our response when we see the ugliness of our own sin and when we feel ashamed is to sew together some kind of facade that is no better than a few figs leaves which begin to wither as soon as they leave the tree.

While Adam and Eve do their best to hide, God takes the initiative. He comes down and sets off to look for them in the garden – just to make the point that He had not changed (Gen. 3:8). This was not a fallout over who ate fruit off whose trees. God was not huffing. What is clear is that God valued the relationship above anything else - it was Adam and Eve who had done wrong.

The law says:  'come out with your hands up or we'll go in shooting'. What God says has grace (even though Adam and Eve were guilty): 'Where are you Adam?' Because of God's love, grace and compassion, their hearts were turned to respond.

Satan lied. God was proved truthful. Adam and Eve did die. But they weren't gunned down in an ambush like Bonnie and Clyde or any other famous villains. They did still die but, as Genesis tells us, it was not for a very long time – at least in the physical sense.

Humanity, although a slowly, dying race was allowed to continue through their children and their children's children. And it is in the curse itself which follows, in v15, that we have a glimpse of redemption and reconciliation and restoration of this broken relationship between mankind and God. '...he will crush your head, and you will strike his heel.' 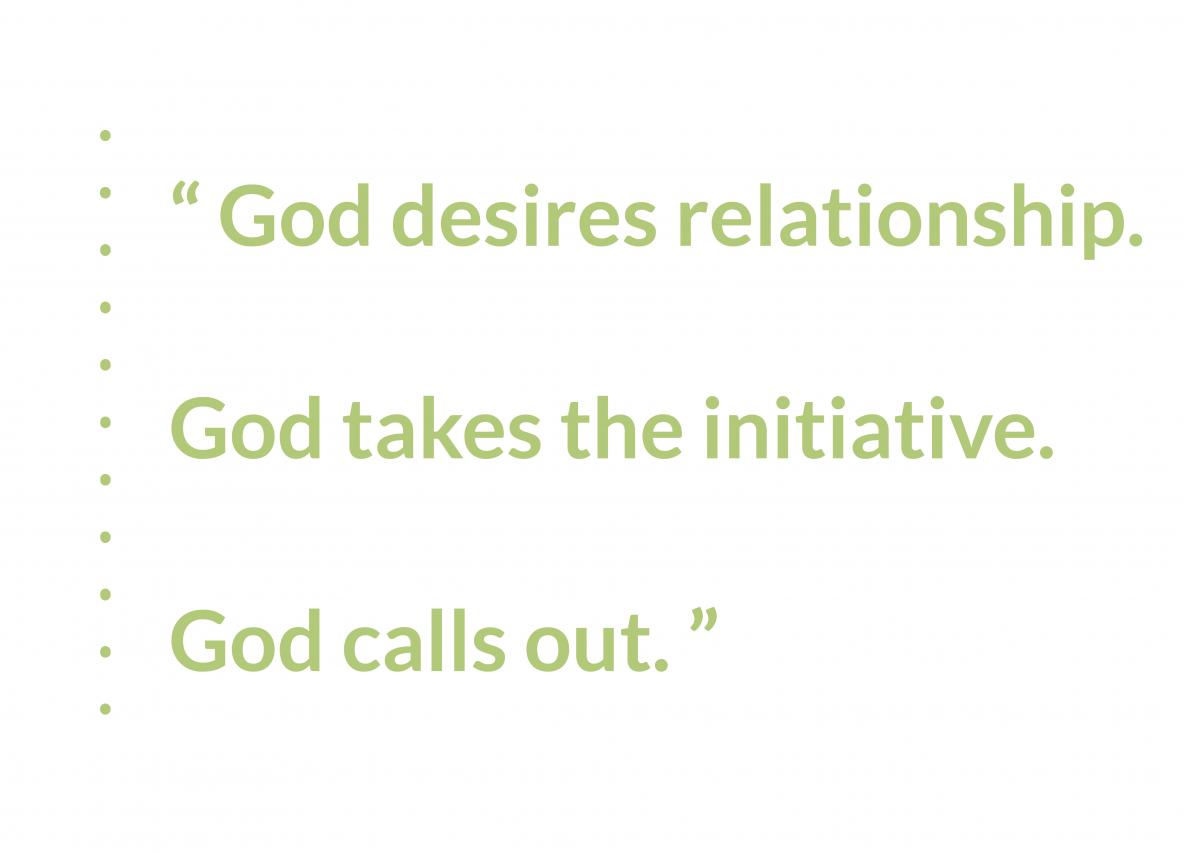 The account of creation and the fall in Genesis does more than either give an explanation of the way things are or a factual account of what went wrong. All the way through the Bible, we see our sinful reactions of self-righteousness and pride, all messed up with all our problems, our defensive and accusing attitudes and our continual rejection of God. We also see God's character revealed as He deals with us. He came down to meet us and he calls out to us from all our hiding places of shame and regret.

And what Adam and Eve only had a glimpse of we can see clearly - we can see that God promises us complete forgiveness, an escape from the judgment of hell, restoration, redemption and reconciliation. We are brought back into relationship with Him – through His Son, Jesus Christ.

God's mission is our mission. We are called to embody and share the good news of the gospel. Wherever we find ourselves, we can point people to the God who desires a relationship with us, the God who takes the initiative and the God who calls out to us.

Paul and Kate McFarland have been serving in Youghal with Baptist Missions since 01 September 2014. They have two children Chloe (nearly 7) and James (4). Paul is from Ballymoney, Kate was born in Zimbabwe but moved to Ireland in her early teens.