Looking back over the 21 years since we arrived in Spain in August 2000, with eight-month-old Naomi, we are very grateful to our home church - Windsor, the three different Baptist Missions Directors we have worked under, the different people who have served on the Europe committee, the wide circle of people and churches who have prayed and cared for us and to God for many answers to prayer, of which these are only a sample…

As soon as we arrived in Spain the pastor of the Benidorm church said we needed “a minor miracle” to find a flat in August, and we got one! Accommodation in Spain continued to need (and receive) minor miracles on at least another six occasions in these 21 years!

We started a youth club and amidst food, football and camping trips there were some professions of faith, but Lidia the youth leader we discipled and trained became the most abiding fruit of that ministry. Through a Bible Study for 20-somethings in our apartment, some came to know the Lord and continue well to this day.

In 2001, with Ruth heavily pregnant, our rental contract was up, so she had to fly back to Northern Ireland to give birth to Ana, but God was good in the midst of it all. However, the close of that chapter of ministry underscored the great need of wise, Biblical leadership for Spanish churches.

New beginnings: a new pastoral ministry in Algeciras, a new home in the south and new arrivals in the twins! Their safe birth was God’s gracious provision because they were lying traverse as we drove the hour and a half to the hospital with Ruth in labour. 2005 brought us a great summer team (there would be five more) with permission from the town hall to run evangelistic activities on the beach and promenade.

Our girls got places in the same school, then with the help of generous family and friends we were able to purchase a house, complete with a tortoise! The fifth move in six years led to years of stability in home life. In a happy period of church life, the membership rose from 35 to 57, 13 added through baptism. A two-year process also led to Andrew and Rosalia Elliott joining us as co-workers. Our fellowship with them was a great blessing and we still miss closer contact with them.

Then Naomi broke two bones in her leg and unfortunately church life also fractured in conflict, but good things kept happening, too, like when 40 unchurched women came to an evangelistic event, many of them fruit of all the hours Ruth invested into English teaching and building relationships. By 2011, the church emerged from the conflict, and it became clear our time in Algeciras was ending.

Andrew became Principal of the EET, the School of Theology belonging to the Spanish Federation of churches. Kevin Sanchez, one of the students, explains an advantage of the online approach: “In my heart, I felt the Lord’s calling, but I needed to find a way to be able to get training alongside my job. I found it in the EET”.

In 2013, the first interdenominational retreat for Spanish preachers (linked to Langham Partnership), was led in stages to 500 preachers attending cycles of regional retreats in 9 areas.

The EET Dual Programme was set up to allow Pastors-in-training to spend half their time studying and the rest learning on the job under the supervision of an experienced pastor. The first graduate will be Isaac Arbalat who has travelled to Ireland. Adequate staffing for the School remains an ongoing topic for prayer.

Meanwhile, Ruth focuses on personal evangelism, discipleship and an after-school club mainly for North African children, offering homework help, crafts, games, songs and Bible lessons. One woman suggested to Ruth they read the Bible together to work on their English and Catalan; five years later they are still reading Scripture together! Then L, from Morocco walked into our church and said to Ruth she “needed help to understand the Bible as she felt a great emptiness inside”. Through many crises, she has continued to this day.

2017 brought Matthew’s (successful) chest operation. The next year the Lord kept Naomi safe in her 6 months in the Comores, then it was Ana in Peru. They are now studying at Queen’s University, Belfast and Trinity College, Dublin. The boys each have one more year at school and are thinking about their futures.

During our children’s lives, Spain has changed enormously, becoming ever more secular, yet Muslims now number two million. But one of the most striking statistics over these 21 years is that the percentage of people calling themselves Protestants has multiplied by eight, from 0,24% to 2%! These figures require caution, but there is no doubt we are seeing definite growth. There are now thousands of places of Evangelical worship. But where are the pastors for these churches who will teach God’s word faithfully? Where is the impact on society that this number of believers should be having? And there are still so many hundreds of towns without any Evangelical witness at all. As we look to the future in Spain, there is still so much work to be done! 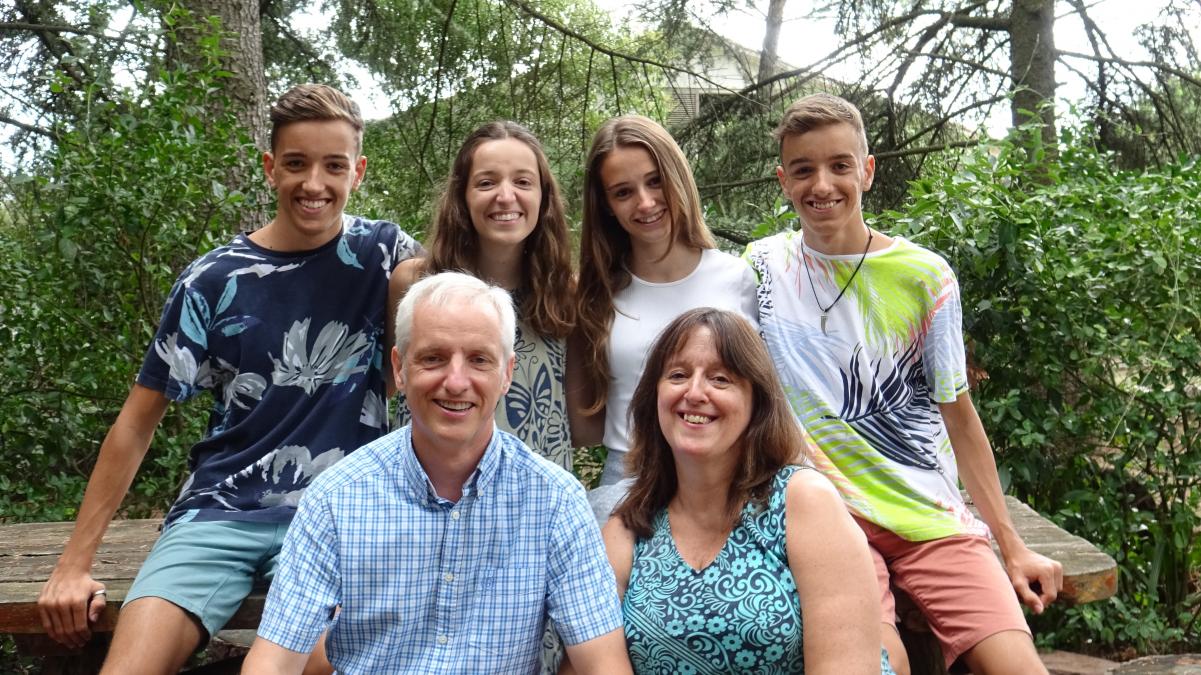 Andrew and Ruth have been serving in Spain with Baptist Missions since 2000. They are members at Windsor Baptist Church. Andrew grew up in Spain where his parents served with C.E.F., Andrew’s grandparents, Stanley and Kathleen Reid served with the Irish Baptist Foreign Mission in Peru from the 1930s-1970.