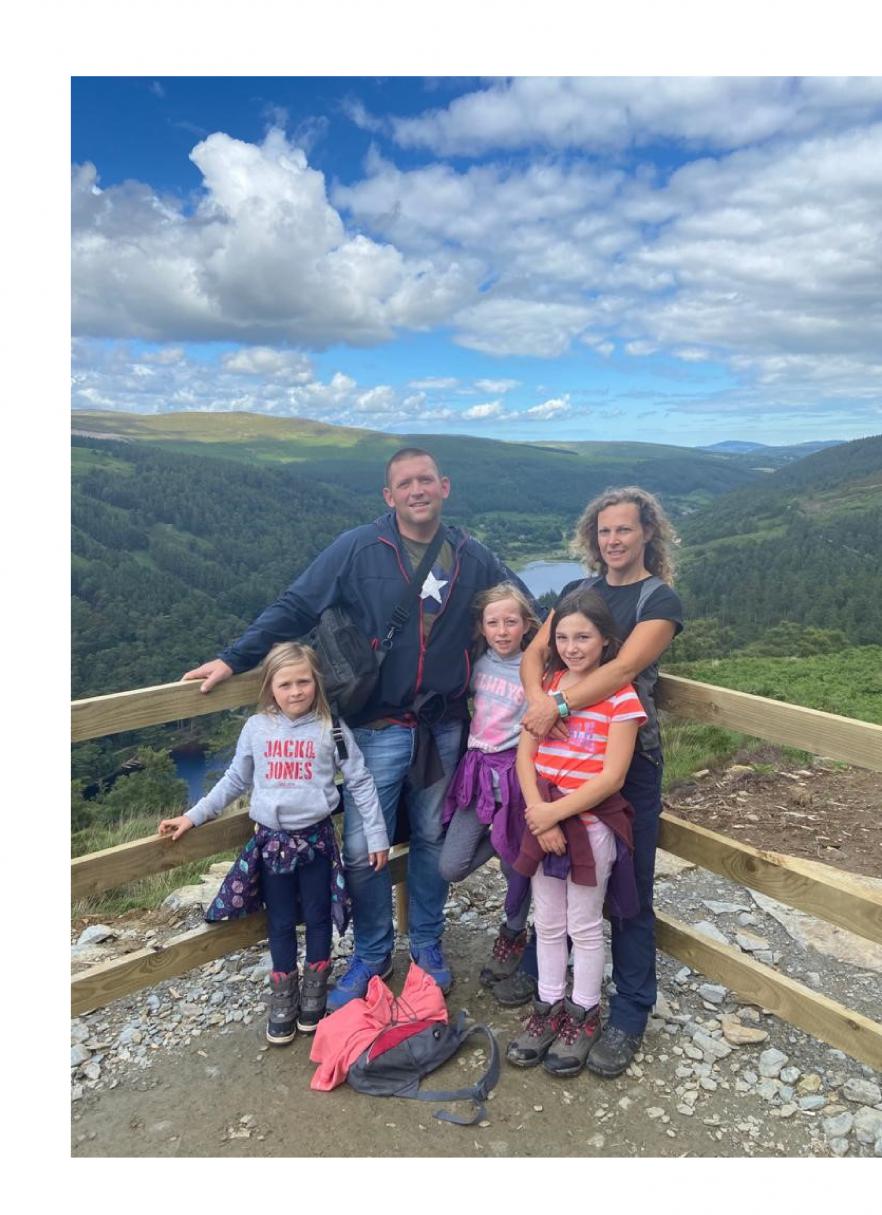 We have always enjoyed being involved in local church life, particularly in hospitality, utilising the farm; putting on Easter spit-roasts, and New Year barbecues, etc. We also ran an Airbnb and loved engaging with our visitors while showing them around. This developed into hosting language students from Mexico and Japan, giving us the opportunity to introduce them to the Gospel. We also took opportunities to talk to neighbours about our beliefs. It was during this time that David sensed a call to Bible College, believing that he needed better training to answer people’s questions adequately.

After much prayer and discussion, we felt that the Irish Baptist College, with its great mix of academic rigour and practical training, was where God wanted David. So, in September 2018 we had a massive auction on the farm and David, along with the girls, went back to school!

Our call to France was a gradual process. We have always enjoyed holidaying in France, and often David had conversations about the gospel with people we met. This led to both an increasing love for French people and culture and a concern about their spiritual welfare.

With David and the girls in education and Hannah at home, the prospect of us all being off for a whole summer was an opportunity not to miss. So, in summer 2019 we planned to spend eight weeks travelling around France. David shared these plans with Mervyn Scott, wondering if there was any way we could serve while we were there.

We had a fantastic summer, which increased our love for both the place and people considerably. We had the opportunity to visit churches, people involved in church planting, and to have a go at street evangelism; difficult when you don’t know a lot of French! We were also able to get involved in Interaction, a bilingual camp in Belgium, enabling us to meet and talk to missionary families. It also showed us how important cultural difference is.

We came home excited about all we had experienced, but unsure whether God was calling us to serve in France yet.

Mervyn encouraged us back to France in summer 2020, to explore specifically whether we could serve God there long-term. However, it was not to be due to Covid-19. But there have been some exciting developments and God showed us that He is in control, even during a global pandemic!

In June 2020, Laetitia Ansett, a French Baptist Missions (affiliate worker), who studied with David at IBC came to stay. She helped with our language learning and put us in contact with people she had done camp work for in France - Tim and Elizabeth Knickerbocker. The Knickerbockers live and work less than an hour from Égletons, in Larodde/Ussel. We arranged to meet by video call.

Tim and Elizabeth, we discovered, were an older couple about to retire from camp and local church work. Their vision for the future was to provide a landing base for new missionaries interested in France, provide them with accommodation, teach them the French language and culture and give them evangelistic opportunities working alongside a local church.

This was exactly what we had been hoping for and the timing was perfect both for them and us. We felt this was confirmation of God calling us to France; and only for the pandemic, none of us would have ever met!

A church-plant in Égletons, Limousin, was identified as a place where we could investigate being able to serve. Having consulted with the elders in the Brannockstown church and successfully completing the interview process with Baptist Missions, we were appointed to serve in France from July 1st, 2021.

We are in Égletons for 2 years initially. The church there has provided us with a house to rent and the girls go to a French-speaking school just down the road. In these first two years, we will primarily be seeking to learn the language and culture, however, we will also get the opportunity to be involved in various church ministries.

It’s a really exciting and scary prospect, but we’ve seen how God has brought us this far and know he will be with us every step of the way ahead.

- For the girls as they have left all they know for a new school and making friends in a foreign language.

- For practicalities of the move.

- For us as a couple to stand firm together in God’s word and truth as we face an exciting but difficult initial phase of getting everyone settled.

David and Hannah are from Naas, Co. Kildare, members of the Brannockstown  Church, where they were married 15 years ago. David was a beef and sheep farmer until going to the Irish Baptist College in Sept 2018 and has recently graduated. Hannah, previously a primary care Physiotherapist from England, has just completed her second year of the Women’s Ministry Course at IBC. They have three children, Eva (11), Emma (10), and Abi (8), who love the outdoors, crafts, Lego, and their various pets.