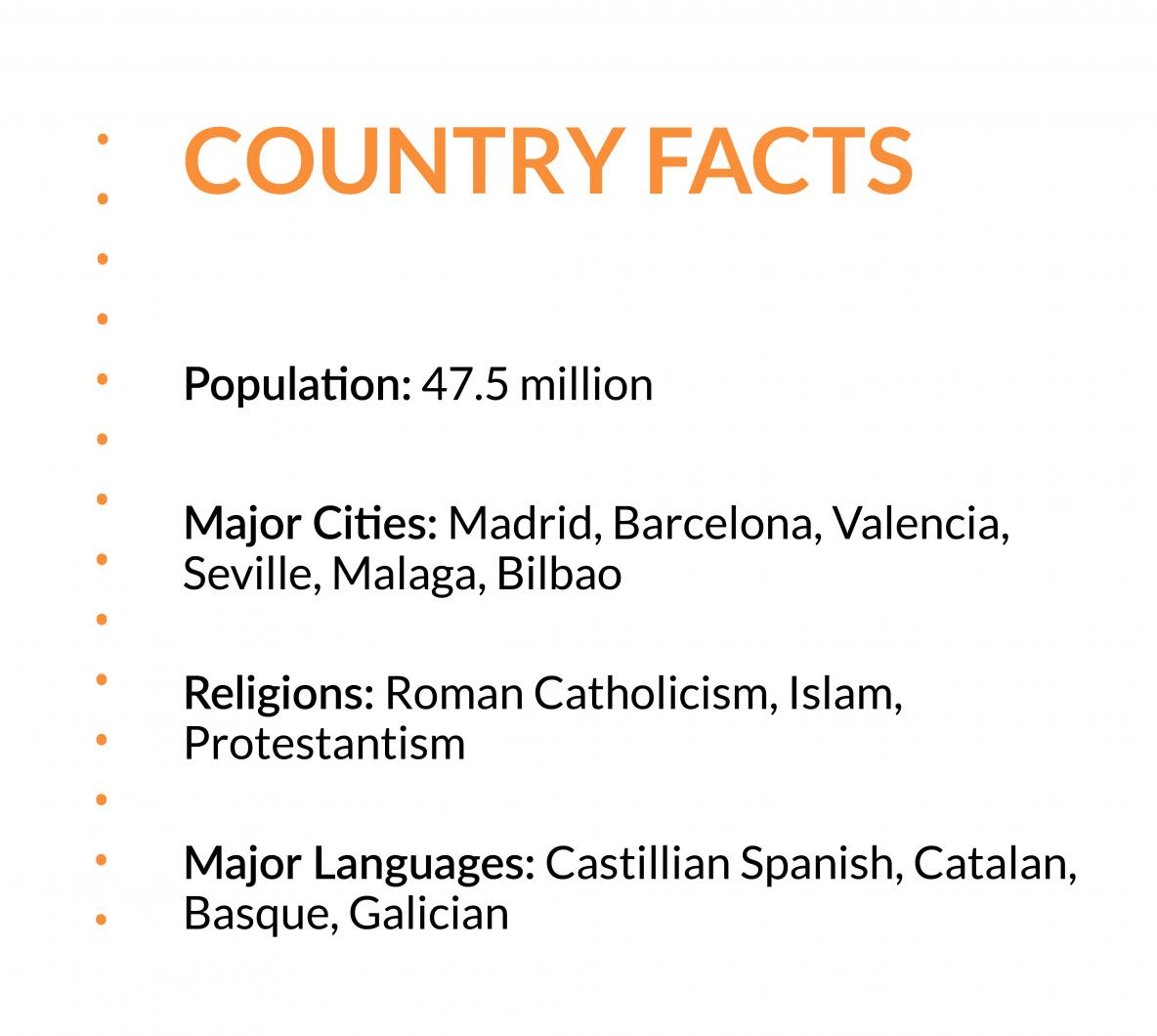 Situated in the south-west corner of Europe, Spain is where Europe meets Africa. One country, but made up of 17 different regions, including the Balearic and Canary Islands, each with their own cultural identity and in some cases language (most notably Catalan, Basque and Galician). The capital, Madrid, in the centre of the country, also marks the line between the more industrial and affluent north, and the more agriculturally focussed south (although in recent decades also highly dependent on tourism)

Flamenco music, paella, bull fighting, sunny beaches- just some of the typical images that outsiders have of Spain. Not wrong, but certainly not the whole history. Spain has a rich history; the nation as we know it today dates back to 1492, the year that the final Muslim kingdom fell to the “Reyes Católicos”. Especially in the south, many place names and cultural festivals still bear the influence of the 800 years of Arab rule. Spanish national life has been dominated by the institutions of the military and the Roman Catholic Church, although in the post-dictatorship era there is an increasing rejection of both. In the south, most national holidays are still marked by either military or religious processions. However, there is much regional diversity- other areas, especially in the north, are now amongst the most secular in Europe. Extended family ties are still important for Spaniards, even though over the past 20 years Spain has undergone huge social changes in areas like divorce, same-sex marriage and gender ideology. Meeting together in public places- parks, coffee shops, for tapas- is at the heart of Spanish social life.

How God Has Been at Work

Spain was formed in what the Spanish call the “Reconquest” when they drove the Moors from the Iberian Peninsula; so historically the mindset has been that “to be Spanish is to be Catholic”. There were brief periods when the Gospel was preached (eg. the Reformation) but opposition was always immediate and fierce. During the Franco dictatorship (1939 – 1975) persecution was a reality for Evangelicals. On becoming a democracy, religious freedom was guaranteed, but social pressure and prejudice continued. Despite church growth over the past 40 years, evangelicals in Spain are still less than 1% of the population. Thousands of smaller towns and villages still have no Gospel-centred church. Still, in many circles, including the federation that BM works alongside, there is a vision for church planting. Also, many evangelicals from Latin America have immigrated to Spain which has given a boost to many local churches, with an enthusiasm for evangelism.

Despite being known as a Catholic country, the biggest challenge to church growth today is secularism and materialism. There is still an interest in what might be termed “spirituality”, but as with much of Europe, a rejection of what is seen as religious institutions (both Catholic and Protestant). A large Muslim population is both a challenge and an opportunity.

A different challenge is the need for pastors and other church leaders who are well grounded in the Scriptures, and trained not just in techniques of evangelism but who know how to give a biblically solid and articulate defence of their faith.