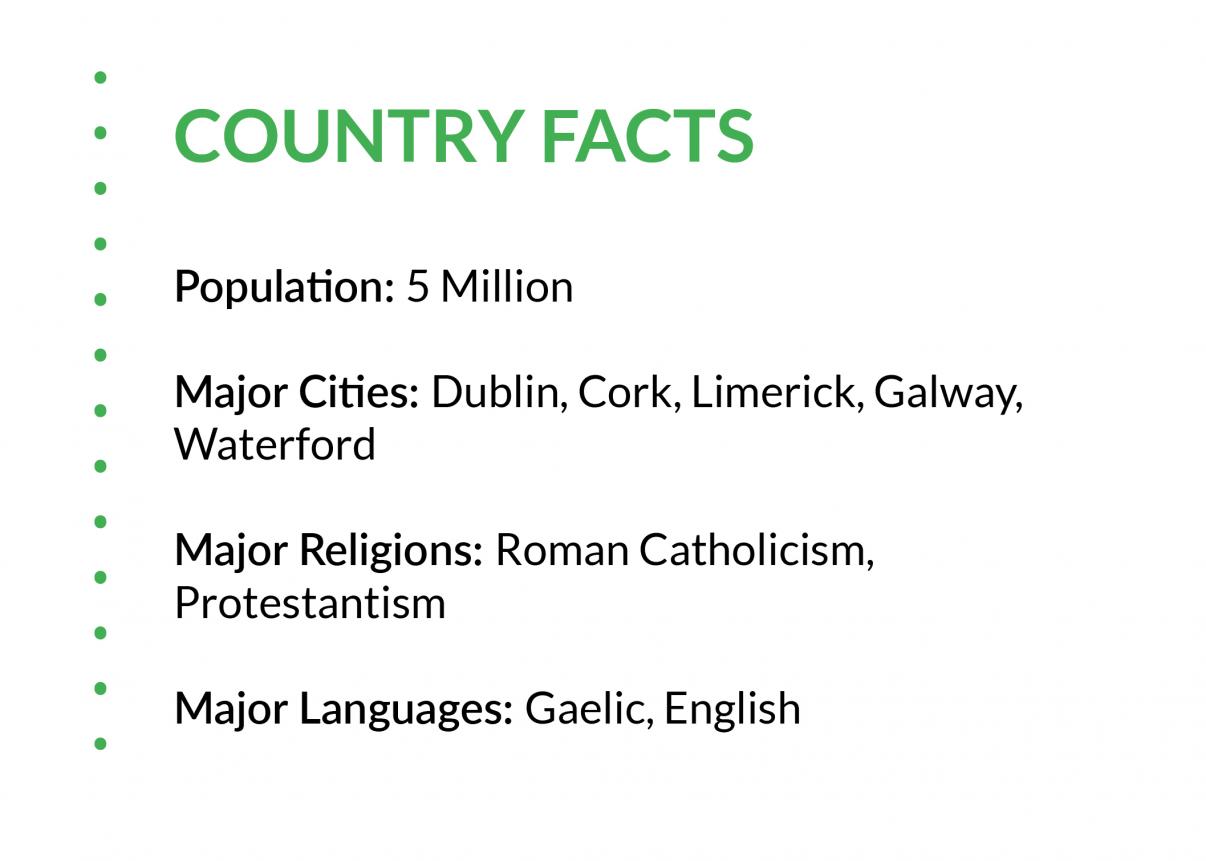 An island in the North Atlantic, Ireland features coastal mountains in the west and interior agricultural lowlands, with numerous hills, lakes, and bogs. The Republic of Ireland covers about 83 percent of the island of Ireland - Northern Ireland, in the northeast, is part of the United Kingdom. Irish, or Gaelic (a Celtic language), is the country's first official language and is taught in schools, but few native speakers remain. Éire (AIR-uh) is the Irish name for the Republic of Ireland. English is the second official language and is more common. The cultural and religious landscapes and of both parts of the island are diverse and so we will give separate profiles for each. This profile focuses on the Republic of Ireland.

While the typical stereotype of Irish people is often focused on a fondness of alcohol, eating loads of potatoes, and being good fun to be around, there is much more to the people of this nation on the fringes of Western Europe. Irish people are hard-working and innovative, with an increasing pride in being seen as a progressive country with a high tolerance for social change. Generally, people in Ireland are laid back and while a faster pace exists in the cities, there is no shortage of witty banter with most people you meet!

It has a rich culture known also for creativity in the arts, a strong literary past and a love for story-telling. Ireland is world-renowned for its Traditional music and dance, which is frequently found in the corners of late-night rural pubs, and on the streets of the cities. The Gaelic games of hurling and football permeate every parish on the island. Tight family circles and solidarity of community have formed the bedrock of society – who you know is often more important than what you know. With this love of family and community comes a warmth and genuineness that outsiders often remark about.

Ireland is slowly becoming more diverse and has learned to embrace numerous immigrants from countries like Nigeria, Poland, Romania and Lithuania, with many families from these countries & others now well integrated into the country as Irish citizens.  Ireland has come a long way economically from the unemployment of the eighties to boom times of the Celtic Tiger in the late 90s to then bust again after the global 2008 financial meltdown. From a base of agriculture, forestry, and construction, Ireland now boasts a highly skilled workforce with a thriving tech industry. The cities (such as Dublin, Cork and Limerick) are thriving places and many rural dwellers feel the urban pull to continue their education or find work. And yet, because of Ireland’s size and aided by the recently-improved road network, people tend to retain their close links with where they are from.

How God has been at Work

The Great Famine (1845-1849) saw one million people starve to death and a further million emigrate to Australia, England, North America and New Zealand. Several Baptist churches ceased to exist during this time and with the foundation of the Irish State in 1922, the numbers of evangelicals in the country continued to decline. In 1980, there were 11 Baptist churches in the Republic that were part of ABCI, but over the past forty years, from a very low base, there has been slow but steady growth in the evangelical community in general and today, there are close to 30 Baptist churches in the Republic. Several other independent evangelical churches have come into existence too in the past 20 years and many large Pentecostal denominations have also formed particularly in the larger cities.

Baptist Missions currently has the highest number of paid workers in its history serving in the Republic with the hope that more will be added in years to come. ROI still has the smallest percentage of evangelicals in the English speaking world and there are scores of towns where there is no evangelical witness of any kind. Our policy has always been to partner with existing local churches to plant new churches. We believe under God that it is churches that plant churches. We currently have an active interest in around ten church planting initiatives in ROI, where either a church has been planted (but the worker is still being financed by the Mission) or where a pioneering work is at an early stage and a church has yet to be formed.

The Republic has largely cut loose from its traditional moorings and pushed itself out to sea, popular opinion is the new final authority and tolerance is paramount. Biblical literacy and ignorance are at a low ebb and scandals of blatant hypocrisy in religious institutions have put people off seeking answers in religious places. Consequently, apathy is one of the prevailing challenges; the increase in secularist thought deems religion and often never read Scriptures as irrelevant.  Materialism distracts and masks people’s perceived need for God and consideration of existence beyond the grave. There is more interest in spirituality, but it is very much self-determined with a growing alignment with new-age philosophies harkening back to Celtic Ireland paganism.