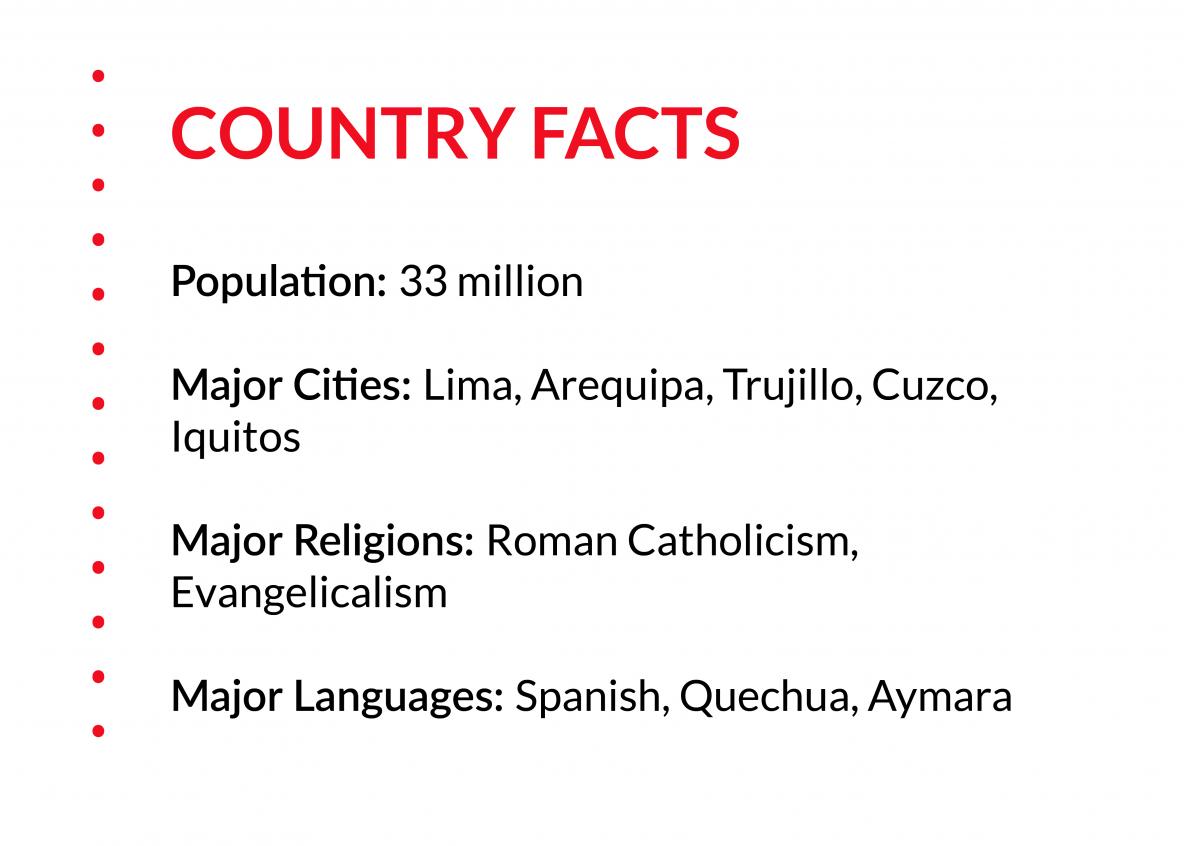 Peru is the third-largest country in South America. Successor to the Inca Empire, it proclaimed its independence from Spain in 1821. It is culturally and ethnically diverse. Generally, it is divided into three regions, the Jungle, the High Andes Mountains, and the Coast. Although the coast is largely desert there are many fertile valleys. Cities are largely centred there and since the 1970s there has been large internal migration to these from the other regions. Often Peru has been under military rule, but it has a fragile though vibrant democracy. In the last thirty years or so it has seen great progress in infrastructure and the economy.

Peru is culturally diverse though the influence of television and the internet is changing this. Peruvians are proud of their historical heritage of Inca and pre-Inca cultures and their world-famous gastronomy. The main areas of work are agriculture, tourism, and mining though again there is great diversity between the three main regions. Independence Day celebrations are very important as are many traditional Roman Catholic feast days both nationally and locally. As education increases and the internet impacts, the coast is becoming more and more “global” in its outlook and way of life. The Andes mountains are more traditional with extended families and tight-knit communities working closely together. Illiteracy has been significantly reduced and most people are positive about the possibility of progress, at least on a personal level.

How God Has Been at Work

Evangelicals have been in the country for well over 140 years and Baptist Missions for over 90. In the last 40 years, the Evangelical population has increased from 5% to 20%, though much of this is nominal or at best superficial. In the first 60 years, Baptist Missions was instrumental in planting over 100 churches in the south of Puno in the mountains around Lake Titicaca. In the last 25 years, we have begun a small Association of churches, a Seminary, and a Radio Station on the coast in the south.

There is increasing secularism and materialism in Peru. Religions, in whatever form are highly superstitious. Some high-profile political and moral scandals in the recent past were also unhelpful. However, there is also an openness to the Gospel, and family and friendship connections help its spread.

John and Lourdes Brew are due to retire in 2022 after almost four decades of faithful service in Peru. God has been answering the prayers of previous generations and has raised up a growing local team of Peruvian men and women to lead the work going forward.  In the last two years, we have increased our support to many and taken on three extra families. Pray that the new Association formed in June 2015 will continue to mature and lead to greater gospel co-operation going forward.